Primarily a painter in oils near to the north coast of Cornwall, creating works which are abstract yet inspired by the landscape of Cornwall, the far South West being his adopted home of 30 years. Originally a goldsmith, after a long career in TV he is now working in the fine arts including painting, printmaking and sculpture.

His work in oils is process driven,  additive episodic periods are intesrpersed with reductive sessions. layers of paint having been initially laid down quickly are then slowly removed sometimes in selected areas but more usually in a broadcast manner. In addition to the conventional attributes of colour, form and tone the physical topographical character of the surface of the work is utilized to create the final composition. Very often the original colour of the paint is lost and the texture created is used to hold another colour entirely. The layers of paint are combined by applying huge pressure to the surface and are cut back using mechanical and chemical means. Often the works are completed with a splash of white, a punctuation mark. Then perhaps an acid or alkali wash of the surface to shift the hue before final levelling to achieve a uniform finish. The series can then be 'released into the wild'. 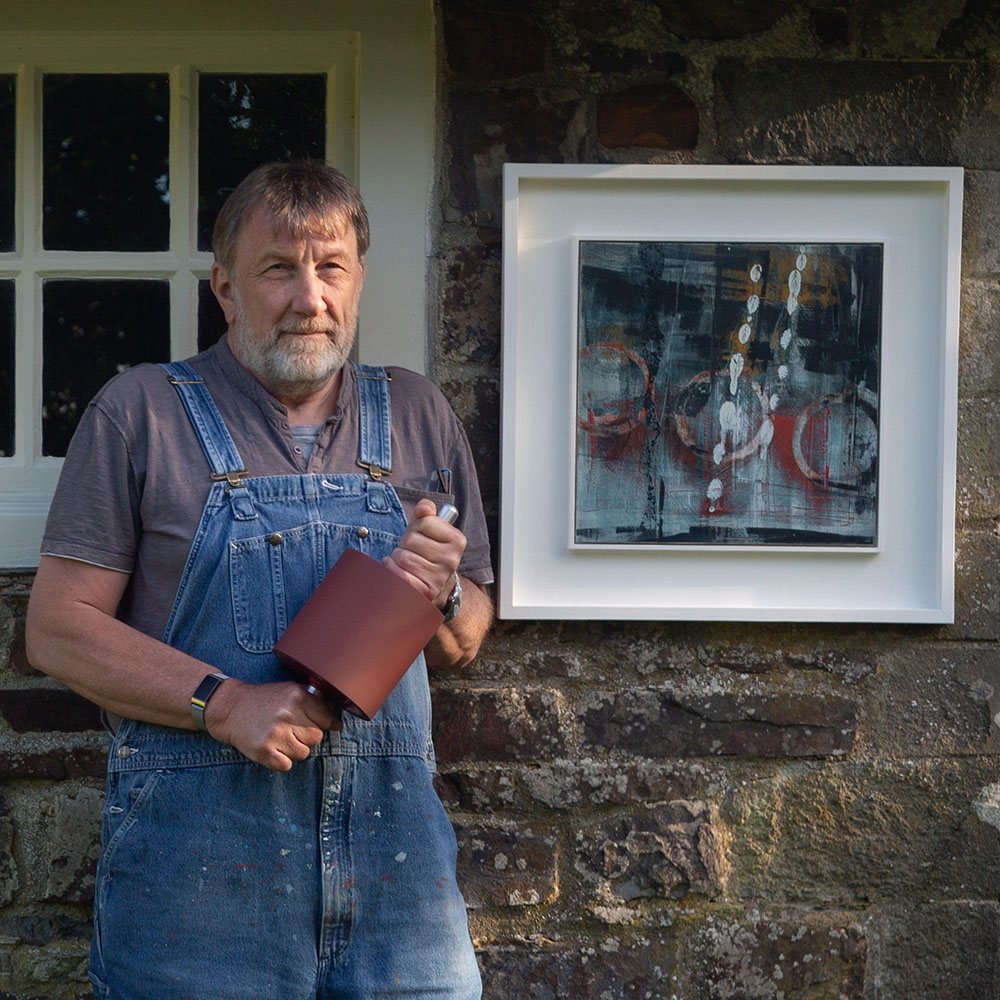 Ian and Penni had lived in the city or thereabouts for 28 years, working in the world of broadcast TV throughout. As he often remarked - "I quite enjoy pedalling up the hard shoulder of the Digital Superhighway"
The couple had discovered what can only be described as a rural idyll, A grade 2* listed cottage built by Sir Edwin Lutyens in North Cornwall situated a mile from the nearest road in one of the darkest locations in England, with a wash house in the front garden to match. This of course became the workshop, previously serving the three cottages it had many of the original fittings, and all of the charm. The wash house is now equipped for painting, printmaking with an etching press which weighs nearly half a tonne plus small-scale metalwork for sculptural pieces.


An education at Gateway Technical Grammar School in Leicester (1966-73) laid the foundation for Ian’s work today. The school was one of the first in the country to embrace the full range of applied arts and crafts as well as fine art. Ian enjoyed all of these and thrived in this creative environment which he felt was made for him. The approach to the individual disciplines echoed very much the ethos of the English Arts and Crafts Movement, built around a skills based attitude depending on the application of 'process' in all things.

His Quaker headmaster encouraged a keen interest in all things creative, recognizing that a students range of talents might not be only academic. This led, with the Heads direct support, to a coveted place on a four-year arts course specialising in silversmithing and jewellery at the iconic Sir John Cass School of Art in Whitechapel, London (1973–77). The course was rigorous, hard and uncompromising yet allowed the possibility of diversions into museum drawing under the guidance of Bert Kitchen, life drawing and the use of the fine art facilities.

Whilst at Cass, the Whitechapel Art Gallery nearby provided part-time employment under Nicholas Serota, and introduced Ian to the world of fine art, with exhibitions by Walter Pichler, Gilbert and George, and in particular British Minimalism epitomised by a major retrospective by Bob Law, who lived at Nancledra, St Ives, and was a major influence in the art scene there.

Ian worked first as a Production Manager for Cartier in New Bond Street, reponsible for overseeing customer orders, the relationship with all of the traditional workshops of the West End Trade and for maintaining the gold stock which included all of the historic Cartier collections of Art Nouveau and Art Deco works. Also, as a silversmith and goldsmith he successfully created and sold his own work in the 80’s, exhibiting with the Goldsmiths Company and Electrum Gallery.

Later he became involved in the new creative scene of videographics and became instrumental in developing new technology, introducing video graphics to the world of marketing in which he was then engaged. He then formed his own broadcast graphics company and earned credits on over 150 series across the whole span of UK broadcasters. His name became synonymous with the programmes of Rick Stein, for which he designed the title sequences and in-programme graphics for all of the major series over a twelve year period. Ian’s qualifications include a DipAd, City and Guilds Higher Diplomas in diamond mounting and gemology and a design award from the Royal Society of Arts.

A move to North Cornwall in 2014 enabled him to begin an intensive period of collagraph and etching printmaking, often working in Penryn, Mary Tavy in Devon, but mostly at the Portmeor Print Workshop in St Ives. He worked for a whole year towards a major printmaking exhibition at the Penwith Art Gallery, designing the promotional material, his efforts being rewarded with strong sales. Soon he was drawn back to working in oils, on gessoed board which provides a robust base for the techniques he uses. Ian creates all his earth coloured paints from raw earth powder pigments acquired in London in the 70’s, a wise use of his college grant at the time. These hand-made paints are then mixed and layered with other oils in varying consistencies. As layers dry, they are partially removed using a variety of methods to work back through the layers – including applying pressure to the surface, effectively pushing the top layers back through the work, visually disrupting the order of the layers of paint.

This process has no fixed duration with many of the pieces emerging from the workshop often after more than a year, as passing stimuli prompt an evolution of the individual series and it's original theme. Works can be inspired by distant memories of time and place or the simple fluidity of a shape quickly drawn in wet sand on a Cornish or Breton beach.

The Mauritanians | A ship's graveyard

Totem | The library of forms

Armorique | Inside Out | Airflow